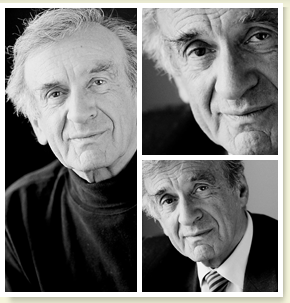 I just saw Ellie Weisel give a speech in Montreal. I had read his book Night, which is an account of his experience in and around Aushwitz.

You can find my review Here.

I expected to be impressed by Mr. Weisel, but his discourse, logic and poetics simply blew me away. He was the most well spoken individual I have ever heard. He pleaded for hope, patience and caring. All war is bad, all hate is bad, all death is bad. Only through dialogue and genuine efforts of understanding, will we be able to overcome our differences.

Ellie Weisel mentioned that life is not made up of years, but rather moments. There is not much I can say that would add to what he said, so here are a few of my favorite moments during the speech (which was in French):

Don’t let your hope become the despair of another

Politics is like war, we all know how to start, buit no one knows how to stop

Indifference is a fundamental problem in the world

Don’t tolerate people, it presupposes an arrogance of superiority; instead, respect them, their ideas, their religion, everything.

In response to how an educated nation like Germany went down the path of fascisim :

Maybe the science of propaganda passed the level of education

A person’s functions are replaceable, but not the person. No individual is replaceable.